Home » Blog » Net-zero China: millions of workers will be affected

Our Principal Economic Modeller, Unnada Chewpreecha, takes a look at what China’s net zero pledge means for jobs in the country.

Two weeks ago, President Xi of China announced that China intended to peak its CO2 emissions before 2030 and achieve carbon neutrality (net-zero CO2 emissions) by 2060.

We still do not have much idea about how China intends to meet its net-zero emission goal, but we modelled one potential pathway using Cambridge Econometrics’ global E3ME macroeconomic model.

In a guest article for Carbon Brief, my colleague Hector Pollitt presented results which showed that the measures to reduce emissions could increase GDP in China by more than 4% in the 2020s, and 1-2% in the long run. Global temperatures could also be reduced by 0.25°C.

These model results have received a lot of attention. Broadly speaking two different messages have been drawn. First, that the GDP results support ambitious climate action in China and maybe other countries. Second, that the positive economic results justify China’s decision.

But do the positive GDP results really justify China’s decision? We are constantly told by environmentally-minded economists that GDP has limited value as an indicator. The Chinese government is surely aware of this too. So, it’s worth thinking this through a bit further.

In The Affluent Society, JK Galbraith writes about the human need for economic security. For most of us, this means the ability to retain a good job, often the one we are currently attached to. Policy makers are acutely aware of this, as is Cambridge Econometrics – often our modelling results get reduced to ‘number of jobs’. The situation in China is no different.

So what can the modelling of China’s net-zero target tell us about impact on jobs? 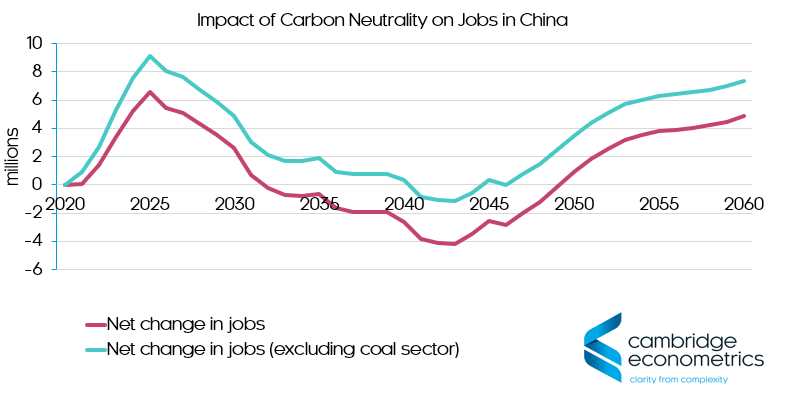 The first thing to note is the scale on the y-axis; the differences run to millions of jobs.

For much of the period, the differences are positive too. The red line shows that up to 2030 more jobs are created than are lost. All the investment in renewables and electric vehicles requires people to manufacture and install the equipment. After 2050, the effects are also positive, because money that would have been spent on imported fuel is diverted to production in China.

In both these periods the benefits could be substantial, up to 5 million additional jobs.

The downsides to decarbonisation

However, impacts are negative between 2030 and 2050. To explain why, we must look at the blue line in the figure. The model results show that almost all the net loss of jobs can be attributed to the coal sector.

This points towards several points of awkwardness for China.

First, the number of people employed in coal mining is substantial (3-4 million).

Second, coal production will need to fall to zero in a carbon-neutral scenario, unless there is a sudden and (to the model at least) unexpected breakthrough in carbon capture and storage (CCS) technology.

The third point lies outside the current scope of the modelling but is nonetheless important: that coal mining jobs are often in remote locations and require skills that may not be transferrable to other jobs. 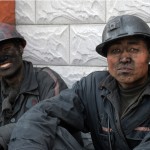 For sure there are benefits to moving people away from coal mining. The Economist has long reported of the dangers of (sometimes unregulated) coal mining in China. The data show that average incomes are low, which is one of the reasons that coal is so cheap in China.

The challenge for China

The challenge to redeploy these displaced workers is immense. It is not an exaggeration to say it could be one of the largest relocations and/or reskilling of workers in history. Although some workers will retire anyway, there is still a risk that millions become the human version of ‘stranded assets’ – i.e. ill-equipped to handle the new climate economy.

China is not alone in facing this challenge, albeit on a larger scale than anyone else. Germany is currently exploring ways to wind down coal production.

In the 1980s, the UK showed what can happen if support mechanisms are not provided (long-term unemployment and deprivation). The US and Poland continue to promote coal precisely to avoid these issues. However, as always when thinking about China, the country’s unique political and social system must be taken into account.

Labour market economists, including the team at Cambridge Econometrics, will note that uncertainty is a fundamental feature of capitalist economies, and the economic security that Galbraith talks about can never be fully achieved. At some point, renewables will become so much cheaper than coal that continued coal production will become infeasible anyway.

Accelerating that process is a brave decision and it remains to be seen how well China and the Chinese people will cope. The model results suggest the benefits could be large; it is up to current and future Chinese leaders to make sure these benefits are realised.