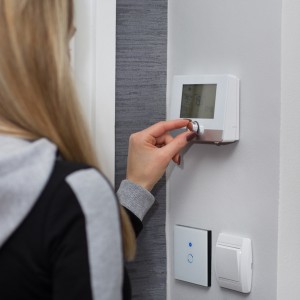 According to a new study, households could cut EU greenhouse gas emissions (GHG) by 29% in 2030 compared to 1990 levels.

The Enable.EU project was established to look into the contribution that households themselves could make to the EU’s climate and energy targets. It brought together numerous partner organisations from across the continent. As the project draws to a close – its final conference is in Brussels this week – I’m really pleased to share some of the results with you here.

Ultimately, the research finds that while the contribution from households could be substantial, it is not sufficient in isolation to meet the ambitious EU energy-climate targets. To meet these targets, action and ambitious policy will be needed in other areas of the economy.

The existing EU policy framework for energy and climate includes targets to be met by 2030: to reduce greenhouse gas emissions by at least 40% (compared to 1990), increase the share of renewable energy to at least 32%, and achieve energy efficiency improvements of at least 32.5% (compared to the EU Reference Scenario 2007 baseline projections).

As part of the Enable.EU project, Cambridge Econometrics and REKK linked their models to create a unique dynamic modelling framework, to assess the contribution households can make to meeting these targets.

Informed by the research of other partners, a scenario was modelled to reflect a future in which households’ decision-making around energy use changes considerably as a result of ambitious policies:

– the democratisation of electricity production for household consumption, driven by the deployment of rooftop solar PV across the EU

– zero local emissions from heating and cooling by 2050

– reduced use of passenger vehicles and a transition towards e-Mobility, sufficient to reduce greenhouse gas emissions from the road transport sector by 80% compared to 1990

The modelling suggests that, by 2030, households can:

– develop renewables capacity so that 22% of EU final energy consumption is met from renewable sources.

This achievement is delivered primarily as a result of the deployment of e-Mobility, more efficient heating technologies and ambitious energy efficiency measures at household level.

While considerable reductions in GHG emissions can be achieved by households if ambitious policy packages are implemented, these reductions by themselves would not be sufficient to meet the EU 2030 target.

Further action to reduce emissions from power generation, as well as other sectors of the economy, will be required to reduce greenhouse gas emissions to the targeted level by 2030. 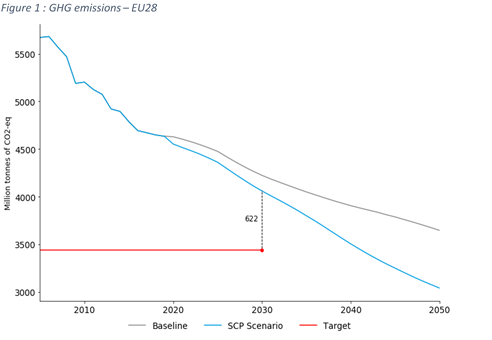 The increased use of solar PV for household electricity supply, plus increased electrification of the heating and road transport, would lead to a higher share of renewable energy in final energy consumption (compared to baseline).

However, the scenario does not include any decarbonisation policies applied to the non-household sectors, which is where the largest contribution will need to come from. 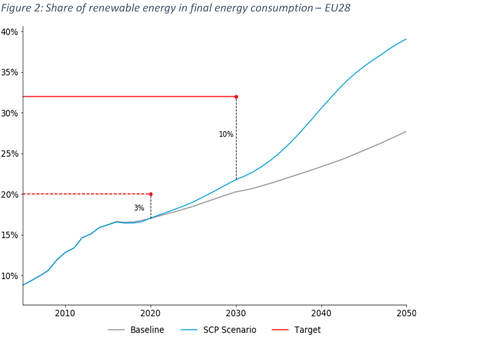 Changing household energy consumption could benefit the EU economy. The policy packages included in the Enable.EU Scenario were designed to encourage purchases of renewable and fuel-efficient technologies while reducing consumption of fossil fuels, which are largely imported from outside the EU.

The associated savings can be spent on domestic goods and services by households, generating employment along supply chains, as well as further multiplier effects, across the European economy.

Overall, there is a consistent small net positive effect on GDP in the EU28 over the projected period, increasing the size of the European economy by almost 1% in 2050 (relative to baseline).

Decarbonising households involves substituting energy provided via fossil fuels with electricity – resulting in an increase in total demand for electricity from the grid compared to baseline. Significant emission reductions could therefore only be achieved through the introduction of additional measures aimed at decarbonising the power sector.