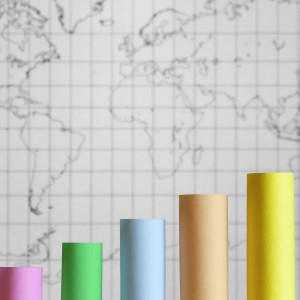 Unlike most other macroeconomic models, ours (E3ME) includes endogenous money as a core feature (including borrowing by government).

This difference is important because it allows us to best predict outcomes that might be encountered by our clients. Find out how…

We get a lot of questions about treatment of the financial system in our macroeconomic modelling – and rightly so, because it is both a key determinant of model results and different to most of the other models out there.

One of the reasons for such interest is that treatment of the financial system in models was brought to the fore following the financial crisis (see my previous blog ‘What is macroeconomic modelling and why do we do it?‘).

Virtually all of the economic models failed to predict it. The model builders decided that the financial sector was unnecessary and missed a crucial aspect of what they should have been analysing.

To be clear, E3ME is not a tool that can predict financial crises and it quite likely never will be. But it is different from most other models in that endogenous money is a core feature, including borrowing by government.

In this way Modern Monetary Theory and E3ME can be aligned. In this blog I explore how and why that alignment is important.

What is endogenous money?

First, some brief explanations for non-economists. The key principle of endogenous money is that the quantity of money is not fixed and is not determined by the central bank. Every time a commercial bank makes a loan, it provides money that may be spent in the real economy.

Crucially, commercial banks do not need to have all the deposits for which to make the loans (every time someone gets a new $100,000 mortgage there is not someone depositing a similar amount). The central bank provides the necessary reserves, as the Bank of England acknowledges.

Endogenous money is core to post-Keynesian economics; Marc Lavoie’s recent textbook discusses money before the real economy. The issue is prominent in nearly all of Steve Keen’s work and there are many further examples. Without considering money endogenously, it is not possible to consider potential economic stimulus effects.

Any boost to spending would instead ‘crowd out’ other expenditure, usually leading to negative impacts and running counter to the observed reality.

‘The role of money and the financial sector in energy-economy models used for assessing climate and energy policy‘ by Jean-Francois Mercure and me explains further why the issue is so important in modelling.

What is Modern Monetary Theory?

Modern monetary theory (MMT) extends the concept of endogenous money to the government sector but with one important difference. That is – if debts are issued in its own currency, a government need never default. The level of public debt does not matter (outside the eurozone), as the central bank can always provide new money to cover the debts.

The idea that the UK could have, for example, gone bust in 2010 which was widely promoted at the time was simply wrong; technically it is impossible for the UK to do that because almost all its national debt is in sterling.

What is widely agreed is that when a government spends more than it taxes, it stimulates demand in the real economy. MMT argues that this is beneficial to the point of economic capacity (e.g. full employment), at which point further expenditure will cause inflation.

This means that the level of government spending can (and many would say should) be adjusted to account for the economic cycle and that public sector austerity is only necessary in a booming economy.

For further discussion see Modern monetary theory in a nutshell by Richard Murphy (a non-executive director at Cambridge Econometrics).

So how is this modelled?

In the E3ME model there is no constraint that matches bank loans to deposits. In other words, it is assumed (as is true in the real world) that investment can be funded by new credit and that savings are not required to create that credit.

Investment (which could also be financed retained profits) is determined by expected production levels and the cost of investment goods.

Savings are determined as the residual between incomes and consumption and usually increase when there is lower job security (as e.g. purchases of new cars and other large purchases are pushed back).

Interest rates do change in the model but using a Taylor rule that mimics central bank behaviour based on the real economy rather than trying to balance loans and deposits, which is not what happens in the real world of banking.

The result in E3ME is that when the economy is in an upturn, investment increases while savings decrease, providing further economic stimulus (i.e. multiplier effects) – because banks are willing to lend more across the economy. So, the quantity of money increases and this has real economic impacts.

This result contrasts starkly with equilibrium-based approaches where interest rates adjust automatically so that no stimulus or change in the money supply occurs.

That said, the government sector is mostly treated as exogenous in E3ME, both in terms of tax rates and spending (tax revenues are semi-endogenous as they are determined by activity rates in the tax base as well as the exogenous tax rates).

This, however, is deliberate: it is up to the model user to determine whether the government maintains a consistent balance or provides stimulus/contraction to the economy. There is no constraint in the model that government budgets must balance, either in the short run or the long run.

Different scenarios can then be tested, which we think is important.

Do we model ever-increasing debts?

Discussions of endogenous money inevitably lead to questions about how much debt it is possible for an economy to sustain. MMT tells us that for central government there is no limit, as the central bank can always provide more money, which is also what happens in E3ME. But private sector debt levels may be much more serious.

The key question of interest is: when does a shock convince banks that they may not get their money back? Once the banks stop lending (or even call in outstanding loans) the supply of money can contract sharply, impacting the real economy sharply.

This is what can create downturns and is one reason why quantitative easing was necessary from 2009 onwards: the government had to create the liquidity that commercial banks were withdrawing from the economy by injecting new money using what it described as unconventional monetary policy.

The point at which banks stop lending is often described as a ‘Minsky’ moment after the economist Hyman Minsky. No one, and certainly not the E3ME model, can identify when this moment might occur, but there are indicators (most obviously private debt levels in relation to output) that can give a good indication of problems coming.

Estimating these types of indicators at sectoral level is difficult given the absence of current data, but this is an area that we are working to improve the available metrics in the model.

In summary, endogenous money is a core feature of the E3ME model. E3ME’s philosophy is consistent with MMT in that it is possible to assess the effects of stimulus packages or austerity on the wider economy; this is mainly a question of how the scenarios are designed. That said, when it comes to tracking private debt and the potential for financial collapse, there is much work still to be done.

There is a lot we could learn here from recent models built by Steve Keen, Yannis Dafermos and Gaël Giraud among others. Some of the insights from these tools could potentially be integrated to a model such as E3ME; others may take the modelling at Cambridge Econometrics in a new direction.